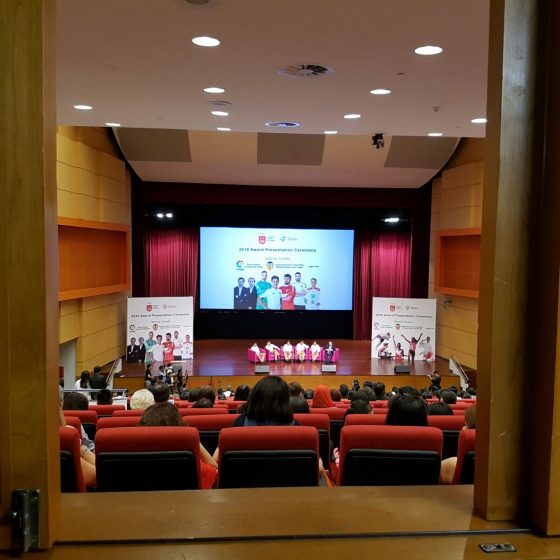 After much procrastinating, I have finally sat down to write about a very nice experience I had the opportunity to enjoy last year. Here it goes!

At the time, I had been working as a translator and interpreter in Singapore for just over three years, but the bulk of my work had been written and any interpreting services had always been consecutive.

When I got a call last year to work with the Singapore Olympic Foundation as a simultaneous interpreter, I was a nervous wreck. I nearly declined the offer, but the organiser was very patient and met with me to reassure me that the experience would be simple, and worth it. She was right, and they were very supportive throughout the process.

Part of the job was to subtitle three short videos that would be shown at the SOF-Peter Lim Scholarship Awards in May 2016. This in itself was a nice piece of work, as I hadn’t done any subtitling in years and it was great to get reacquainted with the process (and the tools!). It also gave me a chance to get some context for the interpreting job that I would be doing during the ceremony.

Then, I received a backbone of the MC’s script – let me tell you: what a relief! This meant that I would be able to pre-translate a large part, and simply adapt to any ‘live’ changes and interpret the responses and comments made by the guests. Phew! Crisis averted. Or so I thought.

The final part of the job was, of course, the interpreting. The ceremony would take four hours, during which the videos would be played, the awards would be distributed, and interviews would be conducted with two-time Olympic Silver Medallist Logan Tom, the Valencia C.F. players Javi Fuego, Jaume Doménech, Santi Mina, Mathew Ryan and Paco Alcácer, the Head Coach Pako Ayestarán, and La Liga Ambassadors David Albelda and Gaizka Mendieta.

So exciting! So scary!

Well, I arrived early and very well prepared the day of the ceremony, and I took my place in the AV booth (you know, that little booth at the back of the auditorium where the little lighting and sound fairies hide away to work their magic). I panicked for a few minutes when it looked like the interpreting equipment had gone missing. The equipment finally reappeared and I was able to breathe again and, more importantly (priorities!), test it. All good. The equipment consisted of a headset to be able to listen to the speakers, and a walkie-talkie. At first, I could hear myself – nope, this would not work. This is why testing in advance is important. I don’t want to imagine my internal meltdown if I had only discovered that I could hear myself AND the speaker at the same time, while interpreting. Easy fix thanks to my colleagues, the technical fairies. The walkie-talkie worked in such a way that I would press a button to speak, and the recipients would hear it through their headsets, provided that they did not touch anything on their own walkies (ie. set them to transmit instead of receive).

So there I was, feeling quite positive because my work was flowing easily. There had been a couple of things that I hadn’t been able to catch due to interferences on the equipment, but these didn’t affect the message too badly and I was able to recover from them quite quickly, thanks to being well prepared with regards to the topic and the speakers.

The interviews were easy-peasy for me, as the Valencia C.F. Communications Director, Damia Vidagany, was moderating them and he speaks both English and Spanish. I didn’t have much to do.

So far so good. I was satisfied with the job I had done, conscious that it was thanks to the amount of preparation I had carried out in advance, and I was ready to head downstairs to meet the players, a little perk of the job. My SO, who is a football fan, came to the ceremony and was given a personalised Valencia C.F. shirt. Off we went to get it signed by the players.

Lovely bunch, all of them. It was cute to see all the young girls that had received the scholarship fawn over Santi Mina and get giggly when taking photos with him. We took some photos too, and I got to talk to the players for a bit… and that’s when I realised that most of their headsets hadn’t actually worked! Only a few of them were transmitting what I was saying, because the rest had not been set to receive. Which is why I kept hearing noises, and why I had to put the volume right down on my headset and listen to the stage mic instead. Technical difficulties, what can you do.

While there is not much I could have done that day, not being familiar with the equipment myself, I know for future reference that it is important for everyone involved to be aware of how the devices work and raise any issues as early as possible so we can fix them. Pretty obvious, it seems, but in all my nervousness I just hadn’t considered that the walkies may not be working!

All in all, it was a great opportunity for me to gain experience, learn the ins-and-outs of interpreting in such a setting, and meet interesting people. I walked away happy with my job and chuffed to bits by the fact that Mathew Ryan (the Australian player) had to ask me where I had learned English because “my pronunciation was great”. Oh, that made my day and I forgot all about the technical difficulties. 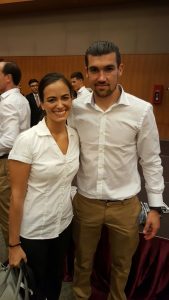 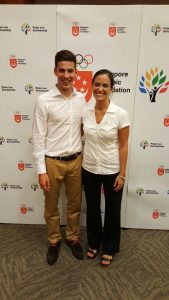 Join the discussion and tell us your opinion